Why Risk Surgery, Drugs for Back Pain?

Because our healthcare system more readily responds to a medical crisis than therapeutic and preventive approaches that might avert such a crisis, the reliance on drugs and surgery has careened out of control. We need more educated consumers who understand that regular chiropractic treatment, as well as physical therapy, are the safest and patient-friendliest approaches

“Two things we have observed is that first, people don’t understand how harmful and unsuccessful the risk of drugs and surgery are,” reports Dr. Brad Butler, Chief of Staff at Oakland Spine & Physical Therapy. “Second, most people aren’t aware of the newest developments in the rehabilitation field.”

Even the most emphatic advocates of surgery concede that any operation carries some degree of risk. If you are intervening in a crisis situation, whether it is surgery or a bank robbery, the risks are there and grow proportionately to the magnitude of the crisis. If you are intervening before the robbers are armed and have entered the bank, the risks may be negligible. 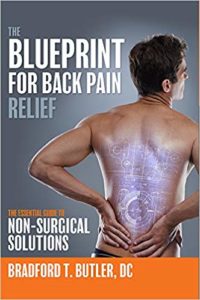 Some of the risks of surgery, such as bleeding and infection, are obvious. Blood clots may be dislodged and travel from the back or neck to the heart or brain—  a risk that might intensify the crisis. A heart attack or stroke may be triggered by a surgical procedure. Back surgery presents a potential for nerve damage leading to paralysis, loss of control of bladder or bowel, unremitting pain and even sexual impotence.

There is also the possibility of a negative reaction to anesthesia and other drugs administered before or after surgery.

Over-the-counter medication may or may not be strong enough and you’ll likely be popping pills several times a day for months at a time. Prescription drugs, especially opioids, have the potential for addiction that could destroy your health in other ways.

There is no question that technology and non-surgical innovations have allowed us to treat the causes of low back and neck pain, doing it safely and with greater effectiveness.

“The good news is that because of the internet, more and more people aren’t just following doctor’s orders but are researching these things and realizing that the risks just aren’t worth the limited results they get,” Dr. Butler points out.

Low back pain is experienced at some point by one out of every four Americans and the major cause of disabilities in adults under the age of 45.